Official Wmc Thread: Um Those Too Many W's! Fix The Tank!

Oct
04
by Barnstable at 1:48 PM (120,272 Views / 10 Likes) 1,057 Comments
Welcome to what we hope will develop into the best Lakers Website online. We want Lakersball to become your Ones Stop Shop for everything Lakers and NBA related.

Feel free to post, make threads and join in the discussion!!

Here are some of the great feature we have for you:

* Game Time Chat- Talk to your fellow Lakers Fans in real time during games or in between from the Shoutbox/Game Time page, or use the pop-out for the chat to talk while still browsing the forum.

* Likes- Keeps track of likes a member receives for their posts.

* Multiple Themes- View the website in your preferred colors. Scroll down to the bottom of any page and click on the message in the lower left hand corner to change the color theme and style for lakersball. We have four choices (Sunday White (the default), Home Gold, Road Purple, and Lakers Nights)

Inside Lakers' Practice: On Nba.com Now

Check it out.
Kobe apparently scolded Randle for hiding in an easy line during conditioning drills...when the cameras were off.
Tweet
Continue reading...
Oct 4, 2014 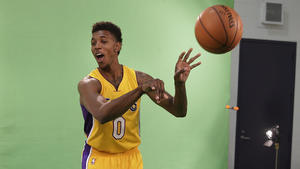 Young and Bryant went after each other during the Lakers’ 5-on-5 scrimmage toward the end of Thursday’s...
Tweet
Continue reading...
Page 169 of 173
XenPorta © Jason Axelrod from 8WAYRUN.COM